Please Be Sure To .

. Re-TWEET my Twitterings
& Publicise My Blogs


To Spread The Facts World Wide


To Leave-The-EU
Clean EUkip up NOW make UKIP electable!
.
The corruption of EUkip’s leadership,
their anti UKIP claque in POWER & the NEC
is what gives the remaining 10% a bad name!
.
UKIP TRIES to deny Racism for years!
Racism & bullying is at the core of UKIP!
Not so much the BNP in Blazers but more a choice of The BNP on Zimmer frames or in Nappies!

Whether they like it or not they are judged by their associates and behaviour!
.

probably one of the greatest acts of folly on the part of UKIP so called leadership has been to link UKIP with racists, xenophobes, anti Jewish and violent anti homosexuals in Continental politics forming the damaging and repugnant Pan EU Political Party EFD Group

Be minded of UKIP's track record of racism and that includes the obscene extremism of Christian evangelism and some of the Baptist cults and sects from House to the Satanic Mormon cults.

Then there was Jeffrey Titford and his connection with extremists with Mike Nattrass prior to their days with UKIP.

Bloom's praise of the killing of Green peace activists in New Zealand were ill considered & the Court decision against him and Farage were further damaging to UKIP's credibility!

Next we saw UKIP's puppet leader the idiotic Malcolm Lord Pearson and his anti Islamic extremism and dishonesty as featured and exposed by The News of The World!

Association with The Swinton Circle by Farage, Tom Wise and others has done little to enhance UKIP credibility! Nor Farage's efforts to negotiate with The BNP: 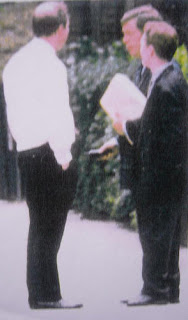 Now we have the dedicated fundamental extremism of Gerard Batten!

One has to wonder who on UKIP NECthought it was a good idea to have Batten colluding with Sam Solomon and not just consorting with but he has written the foreward to the odious and extreme:


A Proposed Charter of Muslim Understanding
By Sam Solomon
Foreword by Gerard Batten
UK Independence Party
Member of the European Parliament for London
1st Edition – December 2006
Revised Edition – April 2007
Seemingly distributed via Gerard Batten's UKIP office and no doubt at the expense of UKIP Funds, which he  is entitled to. Funds that were allocated for the use of UKIP and to further the Leave-The-EU aims of UKIP! 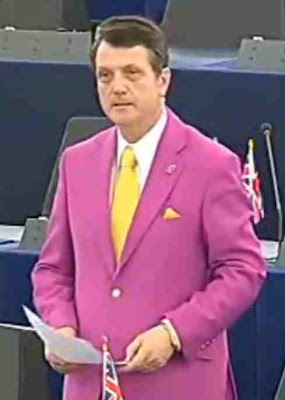 Whatever your superstitions or beliefs I can not believe that even UKIP is stupid enough to have endorsed Gerard Batten's evil and divisive racism be that on colour, creed or views!

I, the undersigned, as an individual, or as an official representative
of an organisation, accept in principle the need to re-examine and
address the meaning and application of certain Islamic texts and
doctrines; and that the issues identified in the Proposed Charter of
Muslim Understanding represent the basis for further discussion of
these issues.
I affirm my belief in:
1. The equality of all human beings, before God and the law
2. Equal rights for women, in principle and practice
3. The rejection of coercion, intimidation and violence in the
name of religion
4. Religious freedom and rejection of the persecution of those
who convert from one faith to another
5. Tolerance of other religions, and their believers, and the
rejection of religious teachings that discriminate against
others on the basis of their religious beliefs.
Please detach and return to:
Proposed Charter of Muslim Understanding
P.O. Box 51542
London, SE1 3XS

One has to wonder who and what degree of malevolence was required for someone to believe this garbage has any place in British politics - You will note the fanciful assumption that religion is a plausible concept on which any sane individual could legislate!!

Can one rationally believe that ANY of this childish drivel has any part in a campaign to Leave-The-EU - Here is more nauseating clandestine material being published under cover by Gerard Batten it would seem - One must wonder who exactly he sees to be his master and surely even UKIP would not subscribe to this racist prejudice:


Multiculturalism depends on the proposition that all cultures, cultural beliefs, customs and practices are equally valid. Mass immigration into many western countries for the last forty years or more has brought with it some cultures and cultural practices that are alien to western cultures and liberal, democratic political systems. Instead of taking a robust attitude against these alien practices western countries have mostly adopted an attitude of appeasement and cultural relativism. Western Governments have been terrified of criticising or standing up against these practices for fear of being branded ‘racist’ or ‘Islamaphobic’.

Most European and Western countries are multi-ethnic societies and is no reason why people of difference racial and ethnic origins cannot live together peacefully; but to do so requires emphasising those things we have in common rather than those things that separate us.  It requires that all citizens living in a given state have broadly the same allegiance, loyalty and belief in a common set of public and political institutions and the acceptance of one legal system. Multiculturalism does precisely the opposite: it creates different and competing groups within one public and political space and is a recipe for division and conflict.

Many European and Western countries have adopted a policy of state-sponsored multiculturalism, designed to preserve and enshrine the beliefs and cultural practices of migrants and to protect and advance them by law and public subsidy. The objective was that the policy of multiculturalism would help absorb and integrate vast waves of migrants from foreign lands. In that it has conspicuously failed – as now has been publicly attested by figures such as Trevor Philips Head of the Race Relations Commission, President Angela Merkel of Germany, President Sarkosy of France, and latterly Prime Minister David Cameron of the UK, to name just four.

However from the point of view of those groups that use multiculturalism to promote their own separate interests it has and is succeeding and they have a vested interest in seeing it continue.


A clear distinction must be drawn between private and public multiculturalism. The private practice of religious and cultural beliefs, customs and traditions should be precisely that – private. We can all enjoy the private practice of different cultures and beliefs and share them with our friends and neighbours. That is a good and positive thing that can help bring people together.

The public policy of state-sponsored multiculturalism is quite another thing and it has created an increasingly more fractured, divided, contentious and uneasy societies. It cannot go unsaid that the biggest beneficiaries of this public policy of multiculturalism are Islamic fundamentalist and extremists who use it to extend their own power and influence in order to bring about their long term goal of an Islamic or Islamic dominated state in each one of those countries where they settle. Multiculturalism also undermines those moderate Muslims who wish to embrace Western values but see power and influence being extended to their extremist co-religionists.

Islamic fundamentalism is the cuckoo in the Western multicultural nest. We can either address it now or be destroyed by it in the course of time.


This short paper is not a detailed history, analysis and critique of multiculturalism and its failure. It is taken as a given that it has failed and has to be dismantled. The points below are suggested policies that could be adopted by political parties and governments of any political colour and in any country in the world that wishes to preserve and promote common western liberal democratic values. The points below are specifically aimed at Britain but can adapted as required.


To be added as per existing ‘Affirmation’


To be added later a per existing ‘burka and face coverings policy’.

One must wonder what twisted mind outside of Nazi Germany would believe this acceptable or even moral - Herman Goerring would be proud of Gerard Batten's efforts and many will remember Nigel Farage & Mark Croucher's collusion to exploit their BNP friends like Buster Motram who was a family friend of Nigel farage's whom he had personally sponsored within UKIP as with his own Election Agent from The National Front!
Nigel Farage was set to not just orchestrate his own Crystal Nacht to seek to rid himself of his enemies (those who believed in probity and that ALL were answerable to the members and the rule of law) - Their own Reichstag Fire was in place and when triggered by Farage at an NEC meeting the low grad clowns on the NEC like puppets jumped through every hoop placed before them.
The result of this 'Night of The Long Knives' was the removal of Dr. Eric Edmond & Dr. David Abbott from the NEC despite their undeniable elected status. The removal of honest men made way for more sycophantic and dishonest puppets - the likes of the fantasist Douglas Denny, the odious and idiotic Mick McGough and others - now UKIP has the misfortune of the Tory reject and the image of sleaze that the risible Niel Hamilton brings as his main contribution to his own very personal ambitions!
Little wonder that Gerard Batten is in trouble with The Courts and facing an Industrial Tribunal with the expectation of some staggeringly bad publicity for UKIP that has absolutely NOTHING to do with the aim to Leave-The-EU. It seems that Gerard Batten may well find himself facing some of the best legal brains in the field of Human Rights and Race Relations, for more details CLICK HERE.
. .
~~~~~~~~~~#########~~~~~~~~~~
INDEPENDENT Leave-the-EU Alliance


Please Be Sure To .

. Re-TWEET my Twitterings
& Publicise My Blogs